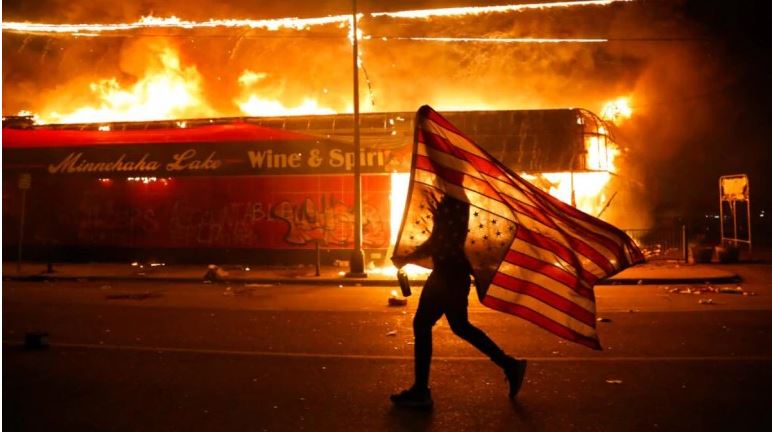 Peaceful rallies over the killing of black man, George Floyd by a white police officer in Minneapolis has metamorphosed as angry Americans burn down a police building on Thursday night in protest.

The protest has continued even after Governor Tim Walz ordered the National Guard into the state to restore order.

According to Reuters, the riot broke out on Tuesday after Floyd was later seen on viral video gasping for breath while a white police officer knelt on his neck.

George Floyd was 46 and was unarmed when arrested. In contrast with Wednesday night, when rock-throwing demonstrators clashed repeatedly with police in riot gear, law enforcement kept a low profile around the epicenter of the unrest, outside the city’s Third Precinct police station.

Protesters massing outside the building briefly retreated under volleys of police tear gas and rubber bullets fired at them from the roof, only to reassemble and eventually attack the building head on, setting fire to the structure as police seemed to withdraw.

Protesters were later observed on the roof.

A car and at least two other buildings in the vicinity were also set ablaze, and looters returned for a second night to a nearby Target discount store, left boarded up and vacant from the previous night, to make off with whatever remained inside.

President Donald Trump on Twitter said that he will send the National Guard troops and “get the job done right” if Mayor Jacob Frey failed to bring the city under control.

“Any difficulty and we will assume control but, when the looting starts, the shooting starts,” he wrote in tweets posted late midnight.

Four city police officers involved in the incident, including the one shown pressing his knee into Floyd’s neck as he lay on the ground, mourning, “please, I can’t breathe,” were fired from their jobs the next day.

The Floyd case was reminiscent of the 2014 killing of Eric Garner, an unarmed black man in New York City who died after being put in a banned police chokehold as he, too, was heard to mutter, “I can’t breathe.”

Garner’s dying words became a rallying cry for the Black Lives Matter movement that formed amid a wave of killings of African-Americans by police.

Throughout the day, protesters pressed their demands that the four policemen be arrested and prosecuted.

“There is probable cause right now” to make those arrests, civil rights activist the Rev. Al Sharpton said as he addressed the crowd. “We’re not asking for a favor. We’re asking for what is right.”

Garner’s mother, Gwen Carr, said Floyd’s case was like “opening up an old wound, and pouring salt into it.”