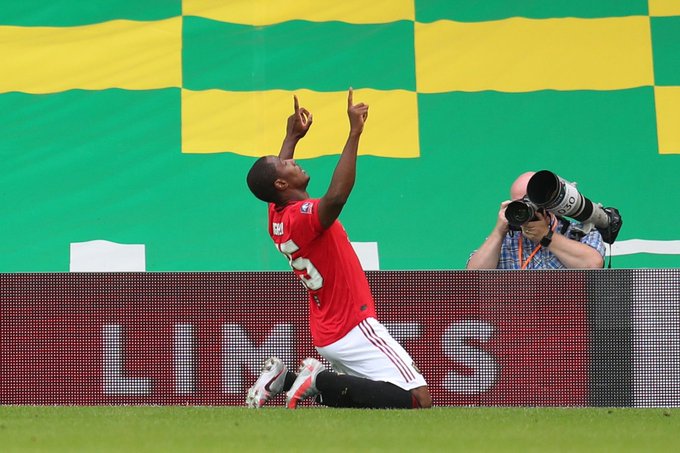 Odion Ighalo’s goal for Manchester United against Norwich City in the FA Cup on Saturday means that the former Nigerian striker has equalled a club record that has stood for 95 years.

He has now become the only second player in the club’s history to have scored in each of his first four competitive starts for the Red Devils.

According to Opta, the previous player to do this was Jimmy Hanson, who achieved the feat in 1925 when he scored in consecutive starts against Hull City, Blackpool, Derby County and Aston Villa.

The Manchester-born Hanson signed for United in 1924, but suffered a serious injury five years later, and was forced to retire.

Ighalo has emulated Hanson’s achievement during a remarkable run early in his United career.

The former Watford man began his scoring run with a goal in United’s 5-0 victory over Club Brugge in late February, before scoring twice against Derby County in the FA Cup in early March.

On his third start for Ole Gunnar Solskjaer’s side, against LASK Linz in the Europa League, he scored and contributed an assist in a 5-0 victory, before opening the scoring against Norwich on Saturday.

Ighalo’s opener was cancelled out by a Todd Cantwell effort from range, although Harry Maguire bagged in extra time to send the northern giants through at the expense of Daniel Farke’s strugglers.

Despite his immense scoring record in matches in which he’s started for United – all of which have been in cup competitions – the striker is yet to score in the Premier League for the Red Devils.

He has made six appearances – all from the bench – amassing 83 minutes of action back in the top flight.

“It is great to have the option to rotate,” Solskjaer told BBC Sport after the match. “Anthony Martial came on and did brilliant, but Odion gives me a chance to rotate.

“He’s a proven goalscorer and played his part in both goals,” the Norwegian coach continued. “He is a great person to have around the dressing room too.

“Odion knows how much we value him in and around the dressing room; he’s a goalscorer, a poacher, he’s strong, we can play the ball into him, he showed for the second and Paul [Pogba] found him.”