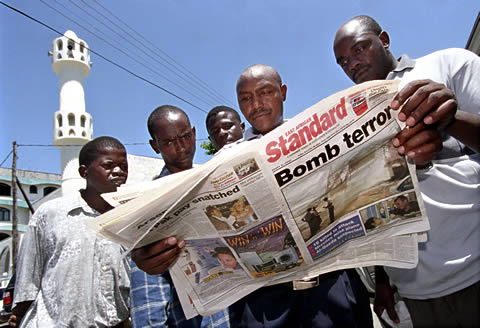 What you need to know:

At least 400,000 people have been displaced by militants in northern Mozambique, according to UNCHR. The country has been struggling with militants believed to be affiliated to the Islamic State.

Africans should be concerned by what is happening in Mozambique and any other country battling terrorism. This is because the people targeted by these outlaws are our brothers and sisters and the terrorism problem in these countries could spill over to neighbouring peaceful countries.

Nigeria is also battling Boko Haram. Gunmen have been abducting students in learning institutions. The leader of Boko Haram claims that his group abducts schoolboys and girls because western education is against the tenets of Islam.

In Somalia, the United Nations Security Council says, Al-Shabaab made Sh1.3 billion in nine months through extortion and illegal taxes. Al-Shabaab has not only been terrorising Somalia but also Kenya.

Other war-torn countries include DR Congo where millions of children are threatened by armed groups, the UN’s children’s agency has said.

Children are at risk from sexual abuse and recruitment as child soldiers by the armed groups like the Red Tabara in Burundi, Revolutionary Front Alliance in Sudan and the Coalition of Patriots for Change in Central African Republic.

The US recently removed Sudan from its list of terrorism sponsors. This will enable Sudan access loans to revive its battered economy. The designation of Sudan as a state sponsor of terrorism dates back to the 1990s when it hosted the then al Qaeda leader, Osama bin Laden. It was also believed to have served as a pipeline for Iran to supply weapons to Palestinian militants in the Gaza strip.

African countries should united to counter terrorism. The African Union must develop better strategies to deal with transnational non-state actors with a global influence and network, which requires state cooperation to contain. Africa should establish a special anti-terrorism force. Wealthy nations should help Africa deal with terrorism.

Christian Majani, 20, is a first year student at Egerton University.