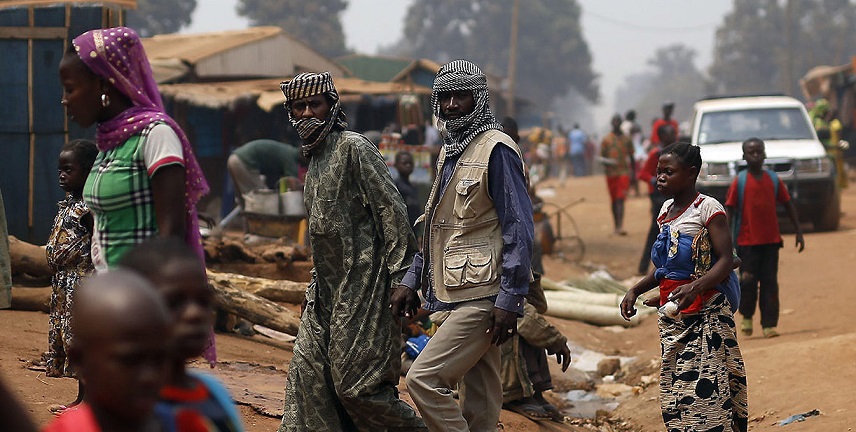 Africa: The World Should Take Note Of Turkey’s Battle For Influence In The Central African Republic

The Central African Republic (CAR) is a landlocked country whose name does not appear often on our Twitter newsfeed. Arab media rarely make mention of it, although approximately 9% of its 4.6 million population are Muslims engaged in a protracted civil war against their Christian countrymen since late 2012. They follow the Malki school of jurisprudence and are based mainly in the northeast, near the border with Chad. Turkish President Recep Tayyip Erdogan, however, is very aware of them and has been reaching out to CAR’s community, quietly and diligently for some time now, seeing them as possible recruits for his international army of Muslim mercenaries.  Meanwhile, the world has been too busy with problems across Africa — like the rise of ISIS in Mozambique — to pay attention to what Erdogan has been doing in CAR.

Turkey’s first contact with CAR Muslims began in 2013, after the toppling of President Francois Bozizé. A multi-layered conflict was fought out between Seleka Muslim militias and opposing anti-Balaka Christians. Most of those who joined the fighting did not do it out of ideological conviction, but for pure financial reasons, given that militia-work was paying good money and because it protected their identity as a community.

As the civil war progressed, anti-Balaka militias took up arms and carried out a series of revenge attacks against their Muslim countrymen. Hundreds of thousands were uprooted from their homes and now live throughout enclaves protected by UN peacekeepers. Outside these enclaves, they are not allowed to wear Muslim garb or practice their religion. There have also been reports of CAR Muslims being forced to convert to Christianity.

CAR Muslims have no history of fundamentalism, nor have they raised the banner of Islamic Sharia. Despite the decade-long conflict, not a single jihadist group has emerged in the country carrying the banner of ISIS. That might change, however, as their community sinks into poverty and neglect, and authorities continue to suppress their Muslim identity and traditions.

With over 400 mosques destroyed across the country, Erdogan has stepped up to rebuild them, endearing himself to the country’s Muslims. In September 2014, Erdogan agreed to send Turkish troops to CAR, as part of the 12,000 strong UN peacekeeping mission. In addition to peacekeeping, his troops are also collecting data on the country’s Muslim community, their political aspirations, and daily needs. The Turkish mission to CAR was last extended for one year in October 2020.

It has also been reported that Turkish weapons have been smuggled into CAR, which is highly possible given the lack of a strong central government, weak border security, and a Turkish desire for influence through arms and military means.

“Leveraging proxy warfare in unstable regions has become Ankara’s new foreign policy modus operandi,” said Suleyman Ozeren, an adjunct faculty member at George Mason University. Speaking to EER, he said: “This policy could radicalize Muslim communities by becoming embedded into networks of proxies who have been affiliated with al Qaeda and ISIS,” he added.

Ankara’s forays into CAR should not be surprising. Since 2014, evidence emerged linking Turkey to the weapons of Boko Haram, an ISIS affiliate. A conversation was leaked between Erdogan adviser Mustafa Varank and Mehmet Karatas, executive assistant to CEO of Turkish Airways, telling him how he feels guilty about the transfer of arms to Nigeria. The recording was posted on YouTube, and subsequently dismissed by Erdogan as vile fakes. Turkey has since come under investigation in Nigeria over the illegal transfer of arms into the country and two Turkish nationals were arrested in December 2019, accused of affiliation with the Islamic State in the Greater Sahara (IS-GS).

Turkey’s Trojan Horse to CAR was initially guised as humanitarian aid to victims of war in the Muslim community. Much of it came from three state-affiliated agencies: the Turkish Cooperation and Coordination Agency (TIKA), the Turkish Red Crescent, and the Turkiye Diyanet Foundation. TIKA reached out to 5,855 families displaced and now living in neighboring Cameroon, providing them with 50 tons of basic foodstuff. To children it gave gifts adorned with the red flag and white crescent of the Turkish Republic. Meanwhile, the Turkish Red Crescent was helping reunite Muslim families divided by the conflict.

“What we are seeing in CAR seems to follow similar phases that the world has seen in Syria,” explained Ozeren. “Initially, Turkey’s outreach in Syria was purely humanitarian based, but later evolved into the second phase: establishing networks with jihadist groups and recruiting them as proxies. The third and current phase is to deploy these proxies out of Syria, like Libya and Azerbaijan,” he said.

“The Turkish National Intelligence Agency is the primary operative in this process. The turmoil in CAR provides Ankara with the opportunity to exploit religious and ethnic tensions, which are the perfect environment for creating another proxy group in Africa and, in the future, deploying Syrian proxies, who are currently in Libya,  to CAR, ” he added.

One year ago, former Erdogan adviser Adnan Tanriverdi raised red flags by saying that Turkey should support Islamic groups against state terrorism, giving CAR as an example. Many doubted if this was a slip of tongue. Coming from Tanriverdi, it was certainly no accident given that he happens to be owner of the military contractor firm, SADAT — a Turkish version of Vladimir Putin’s Wagner Group. SADAT is a paramilitary group that is strongly linked to the Presidential Palace and has sent militia to war zones in Syria and Libya. It has been active in Africa since 2013, just three years before Tanriverdi was hired by Erdogan after the failed coup of July 2016.

Tanriverdi has since stepped down as head of SADAT, relinquishing power to his son and heir, Ali Kamil Melih Tanriverdi and author of a book called “The Rise of the Caliphate.” The radical ideology of the Tanriverdis and SADAT could mean serious trouble for CAR.  Since its founding in 2012, SADAT has been influenced by Salafist thought, attracting young men who were expelled from the Turkish Army because of their religious views. In December 2019, Tanriverdis had to step down from his post after saying that he and his company were “paving the way for the coming of the Awaited Mehdi.” Two years earlier, he had submitted a proposal to the Organization of Islamic Cooperation (OIC) to form the “Army of Islam.”

“Sending arms and military support to CAR will turn the already civil war-torn country into a battleground for a proxy war,” said Suat Cubukco of The American University in Washington, D.C. Speaking to EER, he added: “It is political opportunism. Erdogan uses such crises as a booster for his political support, especially from Islamist and nationalist constituents, presenting himself as a strongman and leader of the Muslim world.”

Will Erdogan’s ambitions in CAR pan out? At first glance, it seems that he will face a tough fight with the country’s current president, Faustin-Archange Touadera. He is a Christian ally of Russian President Vladimir Putin, and the Russians have provided him with logistical support and armed militias from the Wagner Group, who have taken charge of security in the CAR capital, Bangui. Putin has even inserted one of his associates and compatriots, Valery Zakharov, as security adviser to the CAR President, with control over the Presidential Guard.

When the Libyan war started back in 2011, it was being handled by the US, Great Britain, and France — Ankara and Moscow had nothing to do with it. However, they are currently the main players in the country thanks to their proxies on the battlefield. Like Libya, CAR was a country that was previously a playing field for the French and more recently, for Putin.

However, if forced to choose between Erdogan and French President Emanual Macron, Putin would certainly go for the former, with whom he has worked before — against all odds — in both Libya and Syria.  The two men carved up both countries into spheres of influence, dividing the patchwork strictly among themselves while jointly pushing all other players out. With Putin backing Touadera, and Erdogan supporting the Seleka, we could see a repeat of the Syria-Libya scenario unfold in CAR. While neither Zakharov nor Putin would like to see Turkish presence in CAR, they would be willing to deal with Ankara as a fait accompli — if allowed to share spoils with Erdogan.