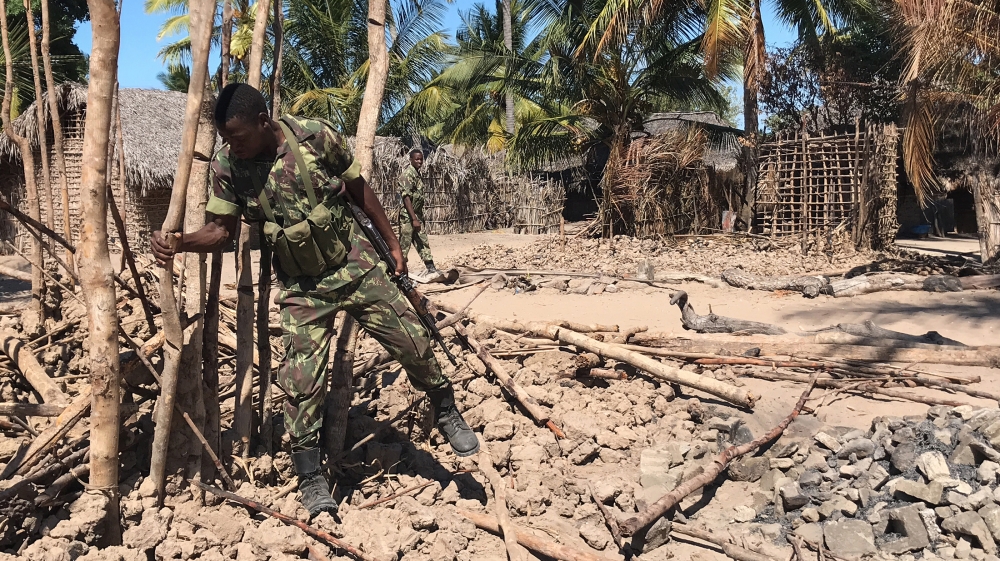 Cabo Delgado, once heartland of the Mozambican national liberation struggle, is turning into an epicenter of conflict and instability, which threatens neighboring countries and regional stability. Armed conflict with Jihadist extremists is exacerbated by privatized security forces and a lack of tangible regional solidarity and security coordination.

Large offshore gas deposits act as an additional driver of conflict while peacebuilding initiatives are still at the very beginning. Extremists aligned with ISIS are emplacing an ecosystem for transnational illegal activity- just as the major gas project development can bring real peace dividends to the impoverished province. In view of escalating violence, it is time for the international response to shift gears and invest in peacebuilding besides counter-insurgency assistance and security sector reforms, including for regulating the activity of private military and security companies. In a new paradigm of partnership with the government, joined-up cooperation, including with future gas customers across the Indian Ocean could buttress the response to the escalating violence.

Armed violence has steadily escalated in Cabo Delgado province of northern Mozambique since 2017. In the last two years, the Jihadist insurgency of “Ahlu Sunnah Wa-Jama” (ASWJ) has gained momentum beyond rural areas. In August 2020, insurgents took control of Mocimboa da Praia town on the northern coast. The complex attack on 25 March against the densely populated city of Palma targeted a staging area for the large offshore gas development project[2]. As a result, the leading energy firm involved in the gas project, Total Company of France, stopped operations and withdrew its personnel from the area.

Although the government announced on 7 April that Palma was recaptured, experts estimate that currently some 60% of sub-districts in the province are no longer under effective government control. The humanitarian fallout from the fighting is catastrophic: 700,000 persons are displaced and around a quarter of the provincial population. The fighting has caused 2,800 casualties so far, reportedly more than half of them civilians, according to ACLED statistics[3].

The government struggled to keep the insurgency at bay after initial denial of the problem. In 2020, the government took steps to reorganize its security posture in Cabo Delgado and created a joint task force against the terrorists. Mozambique and Tanzania concluded an agreement to form a joint defense and security committee in mid-January 2021 for the purpose of intelligence sharing and coordination.

There has also been a growing readiness to accept foreign military advisers and trainers, while local militia groups were used in parallel.The US has recently agreed to provide military expertise and two-month training for Mozambican forces; former colonial power Portugal is sending trainers. The EU has stepped up planning for a possible EU Military Mission to assist the government, after the SADC neighboring states fielded a recent assessment[4].

However, Mozambique has been adamant against foreign troop deployments, due to its non-aligned diplomatic tradition and concerns about national sovereignty. The SADC regional block started to deliberate about a joint security response in late 2020. However, the recent SADC troika summit meeting on 8-9 April devoted to regional security challenges remained inconclusive.

Reforms in Mozambique’s security sector have been incomplete since the end of the civil war 1977-1992, which has debilitated the army in front line roles against violent extremists. Anti-terror legislation was adopted only in 2018 when the insurgency already began to make itself strongly felt. Security governance is further complicated by Mozambique’s reliance on private military and security firms (PMCs/ PSCs), including from Russia and South Africa (Wagner Group, Dyck Advisory Group/DAG) which failed to rout the Jihadists. In northern Mozambique, these para-military actions have drawn strong criticism from human rights organizations such as Amnesty International. There is testimony accusing security company employees of indiscriminate violence.

Already in July 2019, the ASWJ insurgents pledged allegiance to the ISIS branch in Central Africa ISCAP which operates in Congo DRC. Their fighting strength is believed to be around 2,000 in Cabo Delgado province. ASWJ publicly stated its intention to apply Sharia Law as agents of a “government of God”, similar to ISIS in the Middle East and the Al Shabab militia in Somalia. ASWJ has also accused the ruling FRELIMO Party in Mozambique of corruption. In March 2021, the U.S. imposed sanctions against leaders of ISIS-ISCAP and counterparts in ASWJ as terrorists.

Counter-terrorist experts believe that ASWJ which is also locally known as ‘Al Shabab’ (‘Ansar al-Sunna’ or simply as ‘mashababos’) has mostly homegrown origins. However, there are indications that at least some of the leading ASWJ cadres are in fact from Tanzania. Polarization between Mwani and Makonde ethnic groups in provincial sub-districts of Mozambique also plays a role in the violence.

There are growing concerns that the insurgency could spill over into neighboring provinces of Mozambique, especially Nampula and Niassa. Experts have pointed out that there is a risk of expanded territorial control and  illicit revenue streams (from timber, precious stones, and heroin smuggling). This might give the insurgents access to more sophisticated arms[5]. The illegal gold mining business is supposedly bankrolling the insurgency against government control measures.

Spillover into Tanzania across the shared border has already occurred.[6] Security analysts are pointing to an expansion trend of ISIS and Jihadist violence in Africa as their new frontier. Cabo Delgado could replicate the violence in the Sahel region and add a trans-continental dimension to extremism by expanding to the Indian Ocean seaboard. In this view, ASWJ- ISCAP could pose a critical threat to the more developed economies in neighboring South Africa and Tanzania as well as for international shipping and trade. Cabo Delgado is an entry point for what observers have called Africa’s rise as a ‘multi-functional platform’ for global terrorism.

Cabo Delgado province is a majority Muslim area in Mozambique with a history of government neglect and under-development. Youth unemployment is staggeringly high as well as the levels of illiteracy among youth. The province is also a national hotspot for COVID-19 infections.

By contrast, the 20bn USD offshore LNG gas project in the province represents the largest private investment in Africa’s energy sector. Total energy firm of France aims to produce 13 bn tons of LNG gas annually from 2024. Despite the recent setback, Total has stated that the project remains on track.

The lucrative hydrocarbons development and expected funds flows act as an additional driver of extremist violence, competing with the reach of government authorities. Some sub-contractors might end up paying protection money to the Jihadists, although control of gas wells is not realistic for AWSJ.

As global energy consumptions patterns start shifting, producers in eastern/southern Africa are transforming the energy map. A new “Energy Triangle” is developing for gas flows between the Gulf, East Africa and Asia[7]. Besides significant deposits in Mozambique, Somalia also intends to develop its offshore oil and gas resources which locked the fragile country into a bitter maritime boundary dispute with Kenya for the better part of two years.

More flexible energy supplies via LNG shipments are a key element in international energy relations, since gas as “companion fuel” to exit sustainably and smoothly from fossil fuels is almost indispensable for providing a stable industrial energy base load. Asia in particular lacks regionally integrated energy grids. Asian emerging markets drive an unbroken global urbanization trend which requires energy sources ‘cleanest in quantity’, with an emphasis on natural gas and LNG. Qatar has positioned itself for maximum commercial advantage as the world’s leading LNG producer, raising output by 10% in the first six months of 2020. Competition with emerging producers from Africa will be fierce in years to come.

Militarized responses to the insurgency have proven ineffective so far and only made matters worse. Therefore a concerted and multi-dimensional effort is needed to engage in peacebuilding, dialogue and civilian-led security sector reform development with provincial focus. Forward-looking cooperation that draws on the significant economic oil and gas potential to deliver a peace dividend to the population is also required to produce scaling effects for peaceful development and breaking the circle of violence. Yet these energy flows are not destined to lock in competition, but instead hold the key to cooperation in reverse trades of skills and technology for the energy transition through 2050 that can be beneficial for the situation in Cabo Delgado.

Within the ambit of civilian peacebuilding, there is a need for inclusiveness in Mozambique’s security governance. It is important to ensure control over the private military and security firms in the counter-terrorist campaign[8]. In addition, focused deradicalization and extremist prevention actions specifically targeting youth are required. Specialist counter-terrorist skills are a critical element for the Mozambican security forces. President Filipe Nyusi’s new Agency for Integrated Development of the North (ADIN) is a welcome step towards participatory development planning. In late April, the World Bank allocated a $100m USD grant for ADIN for livelihoods, social cohesion and economic opportunities, with additional resources available to Mozambique under the Bank’s Prevention and Resilience program.

Given the magnitude of the challenge, resolving the conflict might require innovative cooperation formats centered on energy links. BRICS countries or a similar arrangement (Brazil, Russia, India, China and South Africa) could anchor multi-dimensional peacebuilding interventions in Cabo Delgado through robust joint ed-up cooperation which is complementing technical military assistance from friendly nations. Building a new “Skills Bridge” across the Indian Ocean around gas technology and capacity transfer for employment could leverage South Asia’s and the Gulf region’s digital learning and training platforms.  This could go a long way to make gas flows drivers of stability between two of the most dynamic world regions and emerging markets in preparation of the global energy transformation.

*About the author: Matthias E. Leitner has served in international peace and security since 1997, mainly in UN and regional peace operations across Africa and in Southeast Asia/Myanmar as well as the Middle East. His specialization is in the Horn of Africa/IGAD Region and inter-regional cooperation as well as cross-learning including COVID-19 resilience. His academic background from Bonn and Oxford Universities is in languages, history and international law.

Source: IFIMES. The views expressed in this article are the author’s own and do not necessarily reflect IFIMES official position.

[1] IFIMES – International Institute for Middle East and Balkan Studies, based in Ljubljana, Slovenia, has Special Consultative status at ECOSOC/UN, New York, since 2018.

[2] The attack is described as a well-prepared, multi-pronged raid which sent government forces fleeing (ASWJ Launches Highly Coordinated Assault against Palma. Intelyse, March 2021). It is assessed that this attack will  increase the appeal of the insurgency to foreign fighters.

[4] In the context of possible EU assistance, the French Minister of Defence has indicated that France’s military assets in the Indian Ocean might play a role.

[6] In October 2020, an insurgent raid on Kitaya village in Tanzania claimed over 50 lives (see: The Islamic State in Mozambique. Lawfare Blog (24 January 2021).

[7] This is based on a contribution to the 9 April 2021 Blue Circle Conference on the geopolitics of energy (Matthias E. Leitner: “ Emerging Geopolitics of Gas Flows – Asia and Africa”).

[8] Normative frameworks exist for private military and security companies in warfare, e.g. the ICoC Voluntary Code of Conduct and the 2008 Montreux Document governing state use of mercenaries.