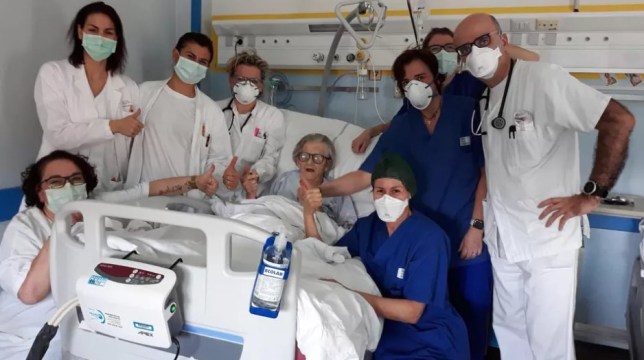 A 95-year-old grandmother has recovered from coronavirus to become the oldest known woman in Italy to overcome the virus.

The woman identified as Alma Clara Corsini was among those diagnosed with the virus and was admitted to hospital in Pavullo on March 5, according to a report by Metro UK.

Her remarkable recovery also made her the first person in the northern province of Modena to recover from coronavirus.

‘Yes, yes, I’m fine,’ she said earlier this week. ‘They were good people who looked after me well.’
According to Gazzetta Di Modena, doctors confirmed she was able to recover without ‘antiviral therapy’ and her body showed a ‘great reaction’.

Ms Corsini has now been discharged from hospital and has returned to her home in Fanano.

Earlier this week, it was confirmed that a 97-year-old man, who is believed to be the oldest person to have survived coronavirus in Italy, returned to his home in Cremona, Lombardy, after spending two weeks in hospital.

On Saturday, the governor of the region, Attilio Fontana, signed a new order Saturday which has now banned all outdoor exercise, including individual running and bike rides.

The northern region of Italy has been hit hard by the pandemic, while the country overall now has 53,578 confirmed cases with 4,825 deaths.