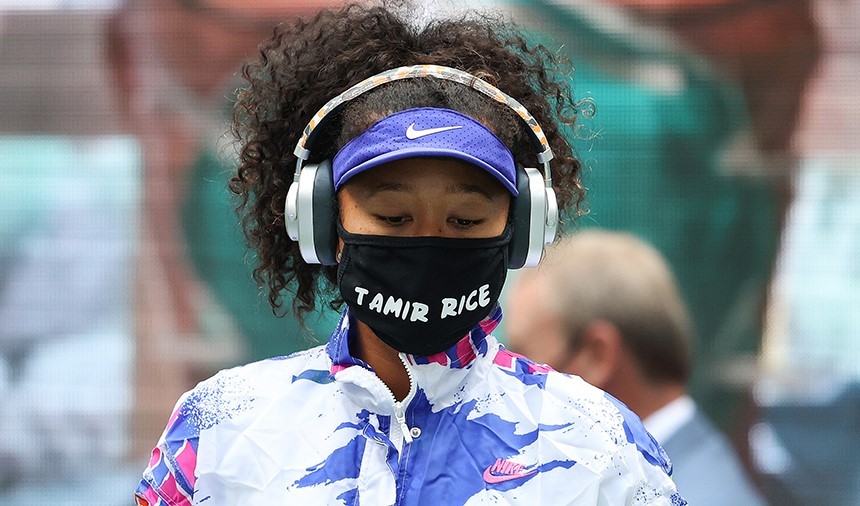 Naomi Osaka’s march towards her third Grand Slam win has been an intriguing journey laced with emotions, purpose, criticisms, and steadfastness. Two years after her first U.S. Open win, the Afro-Japanese tennis star added another major victory under her belt by winning the US Open in New York City.

She is the first woman in 25 years to win the event after losing the first set in the final.

In addition to her show-stopping win, Osaka made headlines for her emotional and subliminal protest against anti-Black racism, especially as touching police violence.

For each of her seven games throughout the tournament, Osaka arrived with a different face mask.

Each one listed the name of a Black person who was a recent victim of anti-Black racism or police violence.

In her first match against Japan’s Misaki Doi on Aug. 31, Naomi Osaka wore a face mask to honour Breonna Taylor, who was shot and killed in her apartment by police in Louisville, Ky. (Kentucky) on the night of March 13. (Image credit: Frank Franklin II/The Associated Press)

In her second match, against Italy’s Camila Giorgi on Sept. 2, Osaka wore a mask to honour Elijah McClain, who died in a hospital in Aurora, Colo. (Colorado) in 2019 after being placed in a chokehold by police. (Image credit: Matthew Stockman/Getty Images)

In her third match, against Estonia’s Anett Kontaveit, Osaka wore a face mask with the name  Trayvon Martin on it. He was shot and killed in Sanford, Fla. (Florida) in 2012 by a neighbourhood watch member  named George Zimmerman. (Image credit: Matthew Stockman/Getty Images)

In her fourth match, against Ukraine’s Marta Kostyuk, Osaka wore a mask in honour of Ahmaud Arbery, who was killed in Brunswick, Ga. (Georgia) in February by a white man and his son after they saw Arbery jogging in their neighbourhood. (Image credit: Danielle Parhizkaran-USA TODAY Sports)

In her quarter-final match against Shelby Rogers of the U.S. on Sept. 8, Osaka wore a mask with the name George Floyd on it. Floyd was killed by a Minneapolis police officer who kneeled on his neck during an arrest in May. (Image credit: Matthew Stockman/Getty Images )

When she competed against American Jennifer Brady in the semi-finals on Sept. 10, Osaka wore a mask honouring Philando Castile, who was killed by police in Minnesota during a traffic stop in 2016. (Image credit: Al Bello/Getty Images)

In the final against Victoria Azarenka on Sept. 12, Osaka wore a mask with the name Tamir Rice on it. The Black 12-year-old boy was killed by police in Ohio in 2014. (Image credit: Al Bello/Getty Images)

After the final, she was asked what message she hoped to send with her masks, she then turned the question on her interviewer, “What was the message that you got? The point is to make people start talking,” she said.

Osaka further said the more people are made aware of stories of police violence, the more likely they are to want to learn more. And the swifter something will be done about it.

Naomi Osaka is truly the pearl of Black activism in sport.